Well ladies and gents, friends and family, strangers and dangers… Ok I admit that was weird. Any who, Tuesday is election day. One of my favorite/the most anxiety-inducing days of the year. I have to say, that despite this election cycle’s unparalleled rhetoric (and mudslinging has been around since our country’s beginning. It’s in our foundation. In books, in mouths, in movies… all around), I am looking forward to Tuesday evening.

This year’s election delves deeper than Republican versus Democrat, than conservative versus liberal. This election marks the first in our young nation’s history for a woman to win the nomination of a major party. Not only that, but a woman with a chance to win.

I won’t go into actual politics (though I love talking about that…just am not trying to start any cyber situations, ya feel? )Anyways,  I am not going to try to get you to side with me, or to even understand my opinions or reasoning–because I believe in forming your own opinion. But, I will say that as a woman in 2016, the fact that Hillary Clinton is running for President of the United States means more to me than anyone outside of my gender could ever understand.

I know that I am only 22-years-old, and therefore have not experienced the level of disrespect and misogyny that my mother and grandmothers have, along with countless others.

I mean two of the world’s (other) greatest economies hold female leaders at the helm (here’s to looking at you England and Germany). When did we become a backwards country? (outside of: race relations, healthcare, the wage gap, gentrification, education and immigration to name a few)

I’ve dealt with my fair share of sly remarks, crude jokes and gestures while walking down the street, as well as being told that I couldn’t do something because I am a woman. But, every time something along these lines happens, I can’t help but think of the women before me. Susan B. Anthony who fought for our right to vote, and likely only dreamed of the idea of a woman one day sitting in the oval office as more than a made or server. As the one making the decisions, the one feeling for the country.

Honestly, women carry life, they give life, why shouldn’t they help lead life? That is basically what the presidency is, isn’t it? Leading those who look up and elect you, with the help and diligence of two other branches of government?

Is a mother, daughter and sister not equally, if not more, likely to think of humanity in her decision? Isn’t it in our blood (arguably) that we feel for one another, our maternal instinct? Okay, so there are arguments for both sides, and men do contribute a bit to the whole making and bringing life into this world, I’ll give them that.

What I am [trying to say/] saying is, isn’t the same hormonal argument that people use to suggest women incapable of holding responsibility and the keys to nuclear weapons, the very same argument that can be made for the sympathetic, thoughtful and feeling person that would weigh the potential lives lost?

What makes a man more equipped, more right for something than a woman with equal education and ability to opine and lead?

Anyways, these are my Sunday Funday thoughts. Might be a tad heavy, but I urge you to consider the sheer miles we’ve come in the last 96 years. One of my grandmothers was born in 1936, the other in 1923. Despite their differences in politics, I hope they can both agree on how far we’ve come.

So, despite your political opinions and possible proclivity to lean towards the right or left… I hope we can all agree that if a woman is elected president of the U.S., whether you love her or hate her, that it is something that is pretty damn cool.

I hope you vote with your conscience, with your heart and with your loved ones in mind… because this election will be groundbreaking, no matter which way it goes. 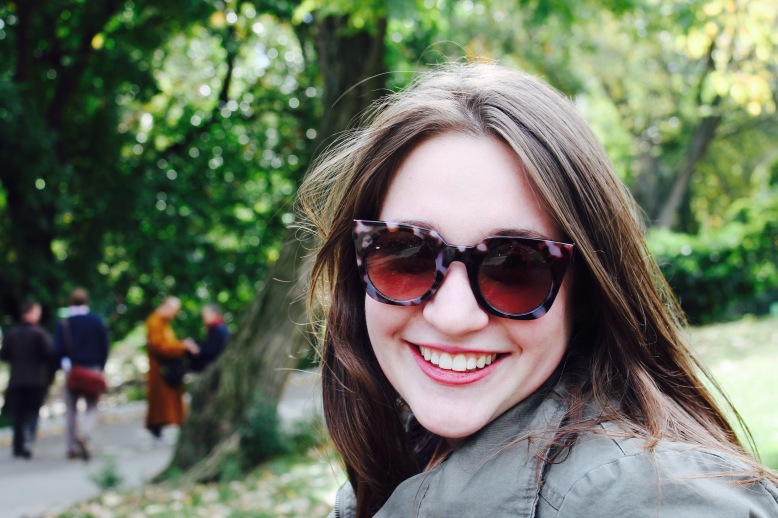 Random pic of me for your records. Please don’t use this for any record. Off the record?

And for the love of Beyonce, please vote.